The Debate to Re-Open JOCUSD Schools Marches On

Senior Tristan King leads group of demonstrators in a march to protest the decision to delay in-person learning. 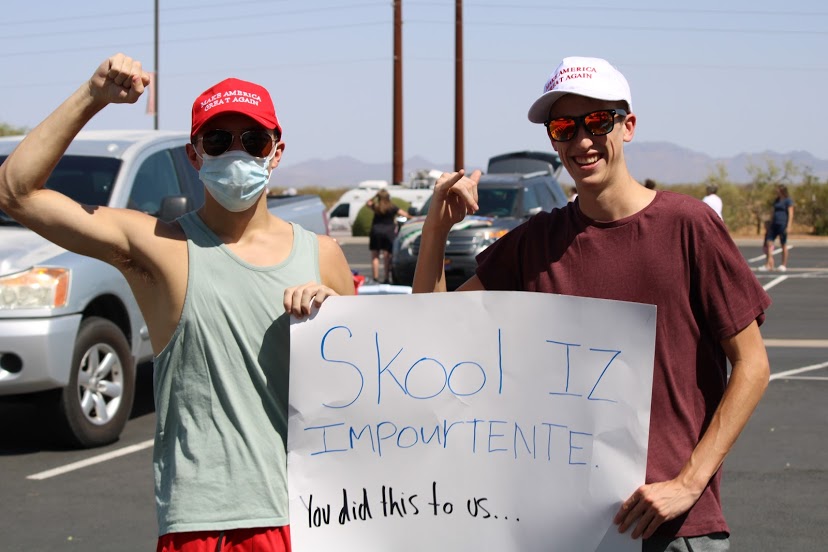 Seniors Chad Moyes and Cameron Ricks march down Germann Road holding a sign that implies they have forgotten how to spell because of virtual learning. Community members marched from Combs High School to the J. O. Combs Unified School District Office in protest of the decision to cancel school due to more than 100 staff calling in sick over safety concerns related to COVID-19.

Students and parents gathered at Combs High School Monday morning to protest the delay of on-campus learning and to support the teachers who agreed to teach.
Teachers across the district called out sick due to concerns about the ability to sanitize the school and keep students and staff safe from COVID-19.

The march was coordinated by senior Tristan King after the announcement of the cancelation of in-person learning was made last Friday.

Disappointment spread to many students who expected to return and hit many parents who intended on sending their kids back.

“I fear that my education is on the line, virtual learning doesn’t work for me, King said. “I need to be in person and have that actual connection with the teacher and learn interactively.”

Despite more than 100 employees opposing reopening, there are some who supported the march.

“I want kids back in school that want to be back in school. I support teachers, administrators and parents, But I work for the kids,” JOCMS teacher Ben Johnson said. “I’m here for them no questions asked, and no political agendas.”

The protest started at the high school at 10 a.m where students and parents gathered waving signs, playing music, and chanting. Concerns and controversy over reopening have been steady throughout summer as opinions about when in-person school should resume varied. at board meeting, that in-person learning was to resume on Monday, August 17.

Although there are concerns about the Arizona Department of Health Metrics not being met, parents were given the option to keep their kids home to learn virtually or send them back to the classroom. No such option was given to teachers and many teachers are concerned about the safety of their students, themselves and their families and it forced them to make the decision to refuse to return.

ABC15 News was on sight from the beginning, recording and interviewing members of the march. Despite the turn out of nearly 100 people, some were disappointed about the attendance.

“I was hoping it would be bigger but sadly I’m not surprised, people are afraid to speak out,” said Jennifer Packaid, a grandparent of multiple students in the district.

Around 10:30 A.M. the march moved west down Germann Road towards the district office. Superintendent Greg Wyman came out to speak to those that had gathered. The superintendent ensured that all options were still up for review.

While speaking to him, many parents asked if they could be brought on as substitutes while some asked that the teachers refusing to return be fired. Despite some negative attitudes towards the teachers, most gathered expressed understanding for the fears the teachers have.

“I understand they’re scared for their families, but I think a middle ground needs to be met to satisfy all parties,” stated King, “I know that our admin is capable of finding a solution.”