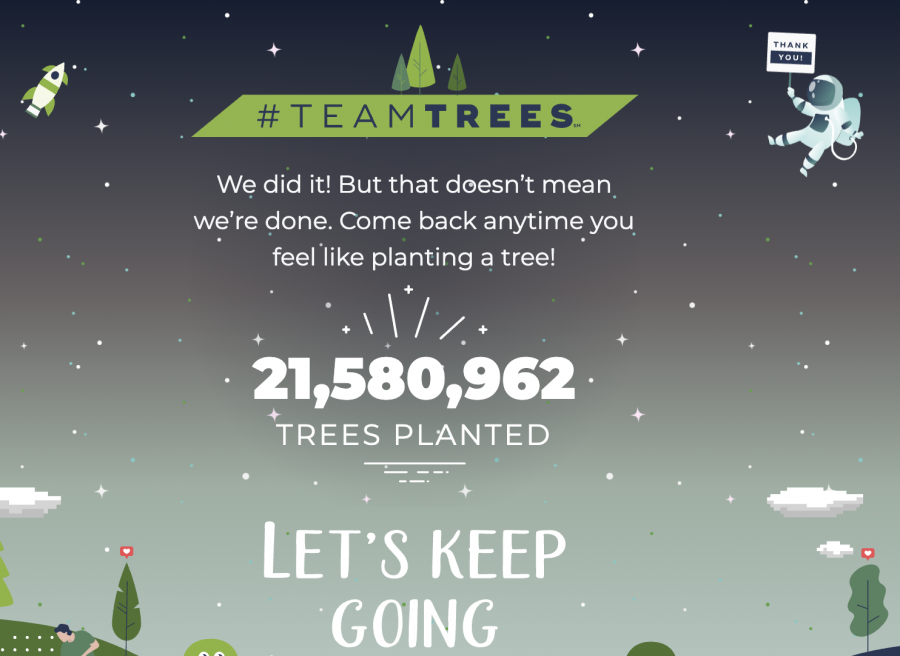 MrBeast has teamed up with the Arbor Day Foundation to create TeamTrees with the hope to help the world!

#TeamTrees was started in October this year to celebrate YouTuber, Jimmy Donaldson, better known as MrBeast, reaching 20 million subscribers. Mr.Beast partnered with the Arbor Day Foundation and many other YouTubers by setting up https://teamtrees.org/ with the goal of raising $20 million to plant 20 million trees by the end of 2019.

The Arbor Day foundation has pledged to plant a tree for every dollar donation. Donations can be made on the TeamTrees website where you can also view recent, and largest donations, as well as on YouTube, Facebook, Tiltify, arborday.org and other sites.

Responsible for the largest donations are millionaires such as Marc Benioff, the founder and CEO of salesforce, Tobi Lutke, the CEO of shopify, and Elon Musk, CEO and owner of Tesla.

“Inspired by Treelon” was reference to Elon Musk change of name on Twitter to Treelon which was later changed back.

Much of the YouTube community has played a huge part in TeamTrees and has made many donations, and efforts to helping TeamTrees.

Such as the Infographic YouTube channel who made a video highlighting all the potential positive effects of planting 20 million trees.

Many donations have been made by big YouTubers including PewDiePie, who was formerly the most subscribed YouTuber and recently hit 100 million subscribers, as well as others involved in the YouTube community such as the current CEO of YouTube Susan Wojcicki.

Mark Rober later posted a video on his channel titled, ‘Using Drones to Plant 20,000,000 Trees’. In his video, Mark Rober meets with a company called Drone Seed in Washington to discuss and demonstrate their drones.

According to the video, the drones are able to map out an area and drop seeds in positions to allow them a high survivability.

The Discovery Channel recently released a special on TeamTrees efforts, “If 100,000 people tune in, Discovery will make a donation of up to $100,000 to #TeamTrees as part of the “Watch and Plant” event”, the company said in a statement to Business Insider. Discover held to their promise and recently donated $100,200 to TeamTrees.

Team Trees is also raising money through the TeamTrees store where they sell shirts and hoodies.

TeamTrees isn’t MrBeast first chairatible event. MrBeast channel is built off of videos where he gives away large amounts of money or items to his friends through challenges.

MrBeasts main sponsors are Bumble and Honey, as well as getting money through Shop MrBeast for his videos.

Global warming and environmental problems have been a big point of concern and debate recently, although planting 20 million trees may not solve climate change, many believe that the initiative will encourage change in the world.  “#TeamTrees is planting 20 million trees in order to 1) be part of the solution, 2) send a strong signal that this massive community cares about the planet we all call home, and 3) Planting trees is a simple solution that everyone can get behind.” acording to the FAQ.

Under TeamTrees FAQ on their website, you can find information on a variety of subjects involving TeamTrees.

TeamTrees has teamed up with major associations to guarantee the plantation of these trees.

“The Arbor Day Foundation works closely with professional forestry partners such as the U.S. Forest Service, and other government and nongovernmental agencies,” said TeamTrees FAQ, “to ensure that tree-planting best practices are followed.”

The ArborDay Foundation will be focused on forests in need,“The goal is to plant trees on every continent not named Antarctica!”.  The Arbor Day Foundation website has previous project location in which they replanted.

Team Trees intends on planting every tree no later than December of 2020.