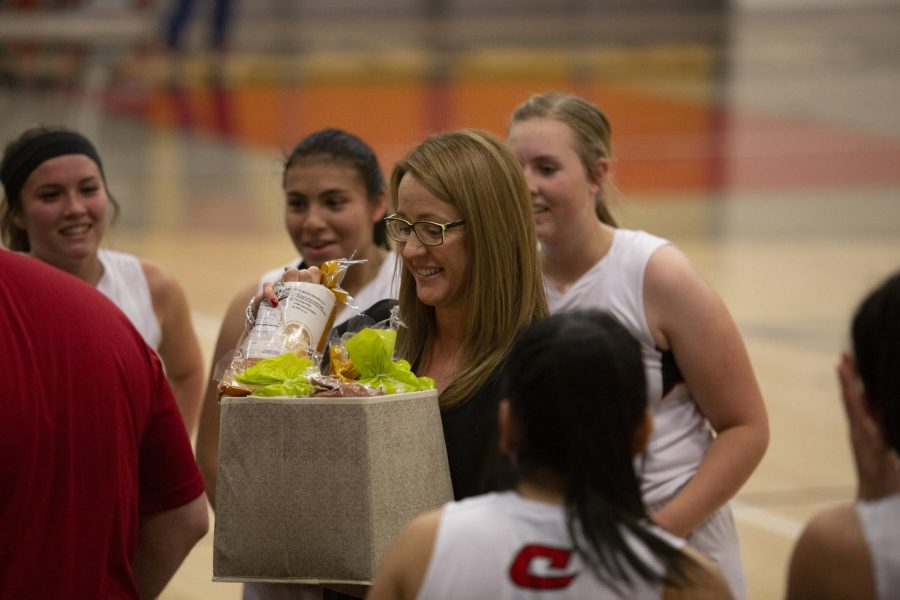 In an instant the clock hit zero and a loud ring echoed through the gym. The scoreboard glowed with the 52-34 final as the Coyotes defeated the Washington Rams Tuesday night.  But it was an announcement by Bob Laliberte over the P.A. system that caused girls head coach Mandi Webster’s face to light up nearly as bright as the scoreboard.

The 18-point win not only moved the Coyotes in to a second place tie with Dysart, it was Webster’s 100th win as head of the program

This memorable achievement was announced only seconds after the game ended, sending the Coyotes into even more excitement. While the players were surprised, Webster was amazed beyond belief.

“I had no idea, it’s not like I was counting,” Webster said. “Even though I’m a math teacher, I can hardly keep track of numbers.”

The milestone victory puts her in elite company in the school’s 11-year history. She is just the third CHS coach to eclipse the century mark in wins and is the first coach to earn 100 wins with a girls team. Ten more wins will move Webster into a tie for second all-time with former baseball coach John Scrogham. 12 more and she’ll surpass former boys coach Kirk Fauske to become the winningest coach in school history.

Many alumnae of the Combs basketball program were in attendance to celebrate the historical win with their former coach making the moment even more special as those who had contributed to the milestone gathered to share the victory.