Assembly during COVID becomes a success 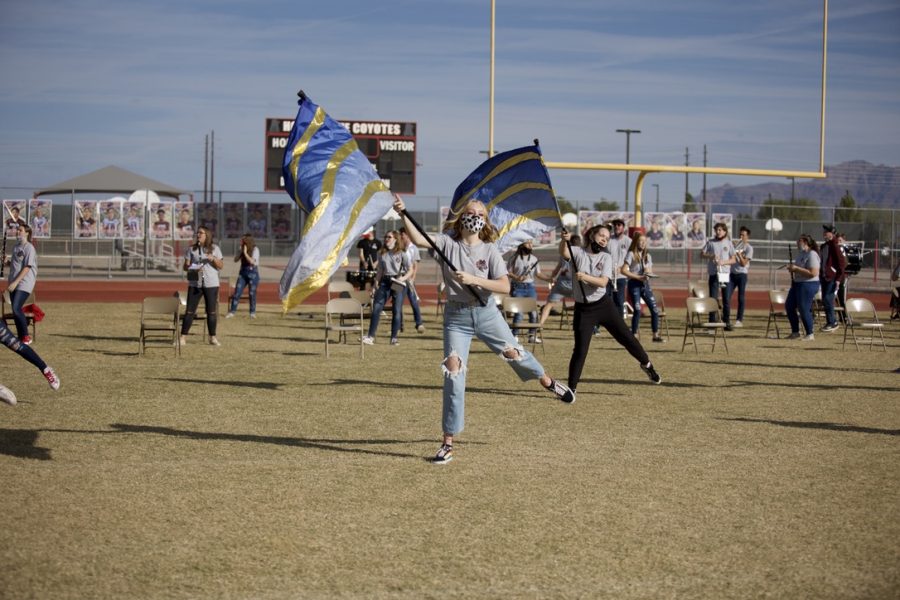 Friday morning, a small breeze blows in as you walk to the football field. The sound of music gets louder as you walk around the sports storage lockers to see the band sitting in one of the end zones playing as the Student council gets ready to start the assembly and the students take their seats on the home and visitor bleachers. The cheerleaders are chanting “CHS” as you can see our coyote mascot roam around the bleachers to raise school spirit.

The Student Council was approved to host the first assembly of the year on the football field November 20. Stuco has been working very hard since they first planned the assembly back in October, but to COVID guidelines of social distancing they had to get creative and improvise as much as possible.

“We’re doing the assembly on the football field because we can only have so many kids at once in the gym due to covid guidelines.” Senior Lexi Schneph said, “Instead of trying to have multiple assemblies in the gym, just use our football field that way we can have two awesome assemblies!”

“The events were all around really good. The relay race was nice even if we did not win, it was pretty hype,” Sophomore Isaac Guevara said, “The sport announcements we have at the school rush was one of the better performances.”

This was the Freshman’s first assembly of high school and it was not what they thought it would be, and not at all what they were use to.

“I think the assembly was fun and it was nice, especially since it was outside and we had more space.” Freshman Savannah Moak said. “It was different from what I’m used to but it was fun.”

Everyone was getting all excited and “hype” through the assembly with all the fun performances that everyone had been working hard for.

“We have been working really hard for a couple weeks trying to critique ourselves and it was really fun being able to perform in front of everyone,” Varsity Cheerleader Daycee Shurtleff said, “My favorite part was probably how everyone was screaming when we announced the sports.”

Due to COVID-19 a lot of competitions were cancelled earlier on in the year and this assembly gave people the opportunity to perform in front of their peers.

“With COVID we did not have many opportunities to play perform so I think this was one thing that allowed us to do that and have our first performance in front of the school.” Clarinet player Amaya Martinez said, “Especially with ‘hey baby’ everyone got really into it and it was just a lot of fun and more entertaining.”