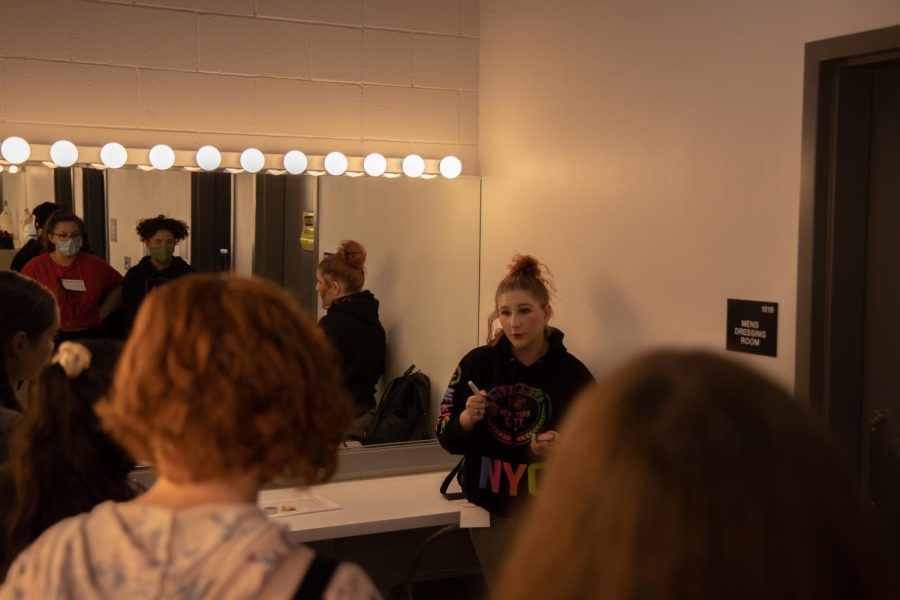 Four years of high school has flown by for CHS seniors, but one group isn’t quite ready to leave behind what they had helped build and expand the way it has. This group would be the seniors of Combs Curtain Call.

The Combs Curtain Call seniors have been here for the construction and completion of the Combs Performing Arts Center where they would later perform “Romeo and Juliet”, “The Odd Couple”, “She Kills Monsters”, “Trap!”, “Beauty and the Beast”, and much more. They will be the last class to perform in both the library and CPAC in the same year.

Memories are constantly being made by the students that are a part of any drama production, whether that be their tradition of chugging energy drinks before opening night, the non-stop rehearsals, or even behind the scenes in the make-up room. But what can be agreed on is that they’ve all grown together and created bonds like never before.

“I think my favorite part is becoming part of the family and having open arms to accept other members, new or old,” Cheyenne Stewart said. “Making new memories everyday is something that can be hard to do, but in drama I have experienced things that I will take into the future and enjoy.”

Just as much as any other students look up to their teachers it’s no different for the actors/actresses to look up to their mentor, teacher, and even friend, Nicholas Smith. He had thoroughly encouraged and assisted every student that crossed his path and left an imprint in hearts with his personality.

“He introduced me to one of my greatest passions, and along the way, taught me to work hard, have fun, and be confident in myself,” senior Cambri Elder said. “There’s no better example to our school of what a truly dedicated teacher and friend should be than Mr. Smith.”

Although students primarily look up to their director there’s also plenty that look up to other cast members.

“Cambri Elder and Jada Rivera are both incredible actors who I constantly strive to be like. They dedicate so much into whatever roles they are given, constantly trying new things and not being afraid to see what works and what doesn’t,” senior Megan McGhee said. “Not only are they both crazy talented, but they’re both super kind and caring to everyone else they work with and are just overall amazing people who I wish I got to know more during my time here.”

The seniors of Combs Curtain Call may be moving onto something bigger and better after high school, but they didn’t move on without leaving their impressions on their underclassman counterparts. Many will retain their memory of their seniors from bonds made throughout the years, and only hope for their future to be bright.

“The seniors this year have taught me so much, and I have made some of my favorite memories with them,” sophomore Alina Gerasimova said, “Although I am sad they are leaving, I’m so grateful for having gotten to know them this year. Leaving high school is just a part of life, I’m so excited to see them grow up and achieve so many more things. I’m truly proud of them all.”

Throughout their show career they have gone through many challenges like the cancellation of “Mamma Mia”, but as their latest production of Disney’s “Beauty and the Beast” comes to an end the seniors of Combs Curtain Call take their final bow on the stage they grew up on, walk across another and move onto their next challenge in life, the future.

“I’m going to miss the family, the community, the bond of love that we share for not only theater, but for each other,” senior Jarret Rutherford said. “It’s not just about acting weird on stage, it’s not about being fools around one another, it’s about taking care of each other when we can’t take care of ourselves.”