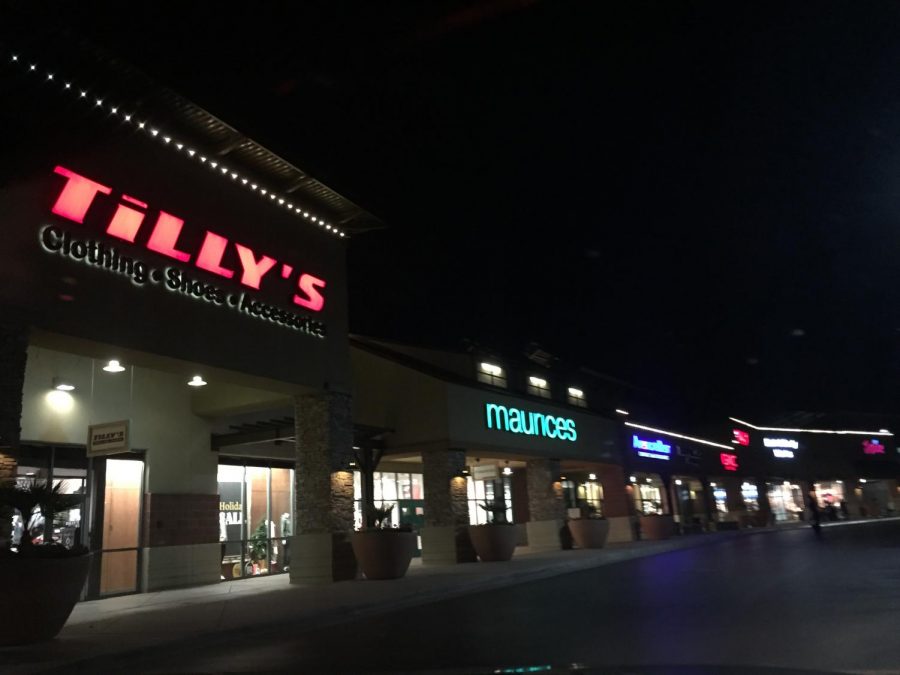 This is the main strip of the Queen Creek Marketplace that many teenagers walk around.

A group of Teens pulled into an empty parking spot to the Queen Creek Marketplace, they are by themselves while their parents are out running errands. They decide to walk on into Target. They just wanted to shop and get some Starbucks but got distracted by funny hats and fluffy scarves. They decide to take funny pictures and ride around in carts throughout the store. They spot security coming. They get out and try to run and hide. They get caught and get kicked out of Target and banned for the rest of the evening.

Stores like Famous Footwear don’t enforce it unless it is necessary. Others say that they need to enforce it because security has told them to enforce it but they don’t say why. Other stores like  declined to comment about the “16 at 6” altogether, but a Ross manager who requested not to be identified by name was able to shed some light on the policy that came to be.

“Its for protection of the stores as well as the young people, and they should not be running around. It’s kind of dangerous,” Ross manager said. “A lot of teens were just hanging around  the stores and not purchase anything, and it does disrupt other customers.

“The 16 at 6 program is something that is put on the whole shopping center. So it’s something that, we enforce here because,” A Tilly’s employee said. “It’s just one of the rules of the center.”

Teenagers that are caught loitering have a higher risk of getting kicked out. Teens younger than 16 do not enjoy this rule one bit.

“My friend and I got kicked out because we’re screwing around in Target. There were three or four security guards and they asked if “who getting kicked out the fastest” was a  challenge,” Freshman Ashlyn Woodrome said. “We couldn’t go back to Target the rest of the night. Once we walked out they watched us for the rest of the time we were there. Later one or two security guards were shining their lights and following us because they were trying to kick us out of the whole marketplace. The rule is kind of annoying because we usually go on a Friday after school. Some people have clubs or sports after school that doesn’t end until six and now they cant go to the marketplace because how late their activity goes.”

“We still invite everyone to enjoy the amenities that we offer at Queen Creek.’ ’16 at 6’ just applies to anyone that is loitering at the center. So if you are here to shop, dine, eat, or see a movie, they are more than welcome to enjoy Queen Creek Marketplace and all we have to offer,” Adam said.” We’re just wanting it to make a safe environment for the tenants and make sure that everyone that’s in their spaces are there to shop and dine.”

Harkins does not participate in the 16 at 6. You are still able to go watch a movie and eat popcorn. It is only a small thing, it is not required for Harkins Movie Theater.

The 16 at 6 policy does not concerned some students and teens that go to the Queen Creek Marketplace.

“The rule has never applied to me because i’m way over 16, but personally i think it’s helpful,” Senior Kayla Dobner said, “A lot of younger teens do dumb stuff and ruin the other people shopping. I definitely love shopping there.”